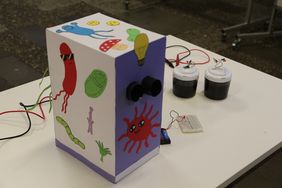 From an evolutionary-biological perspective they are truly ancient, yet their potential is only now being gradually discovered: Electromicrobes, as they are known, are gaining particular attention in current debates on sustainability among scientists worldwide. They are able to produce and conduct electrons - meaning essentially electricity. And they can do this largely without energy loss. Viewed in molecular terms, electricity is actually a vectored flow of electrons harnessed by all living organisms within their cells.  An interdisciplinary team from TU Berlin is working on this very topic as part of this year’s BIOMOD competition (Molecular Design) for students from all over the world being held in San Francisco.  “Our objective is a biological battery,” says Franziska Graeger, a biological chemistry master’s student at TU Berlin and member of Team smart B.O.B. (Smart Biologically Optimized Battery).

When electrons leap from one molecule to another, energy is sometimes released within a cell. Scientists have been aware for some years that certain bacteria are thus able to emit electrons into their environment. Certain membranes allow some of these bacteria to conduct electrons to positively charged metallic ions in their surroundings.
Smart B.O.B. scientists are utilizing different types of bacteria and combining their properties. “The bacteria Shewanella possesses a special protein construct in its membrane enabling it to emit electrons directly to iron or manganese in its surroundings. Our first step is to introduce this protein into cyanobacteria by means of gene technology. “Cyanobacteria are a kind of interface between plants and bacteria. They are autotrophic, meaning that they are able to use sunlight to produce the energy carriers glucose and oxygen from carbon dioxide in the atmosphere. “If we succeed in introducing the protein complex from Shewanella into cyanobacteria, then these proteins could adopt the electrons created by photosynthesis and emit them to an external electrode. This would enable the generation of an electric current,” explains Graeger, expanding on the research group’s objectives.

It is already possible to collect small quantities of free electrons from various soil bacteria. The researchers have successfully demonstrated this with a small lamp on a jar filled with soil. Two special electrodes absorb the electrons from the soil bacteria in the earth and conduct them to the lamp. “Of course, this only permits us to generate a small amount of electricity,” says Franziska Graeger. “We can only power a small lamp using this process. Our goal is to clone as many protein complexes as possible from Shewanella into cyanobacteria in order to generate considerably more electricity. A conventional printer could be used to directly attach special bacteria to the electrodes, allowing a direct exchange of electrons to optimize the process.”

An interdisciplinary team drawn from various Berlin universities first competed in the international BIOMOD competition in 2015. The project is hosted by the Chair of Biocatalysis led by Professor Nediljko Budisa and the UniSysCat Cluster of Excellence at TU Berlin with funding from the Society of Friends of TU Berlin’s prize for outstanding teaching. “Interdisciplinarity is extremely important for the team,” says Franziska Graeger, “as we have to organize absolutely everything ourselves; it is much more than just being in the lab doing great biochemistry work. Our work includes ensuring we have a functioning lab, a good website, performing well at the jamboree in San Francisco in October, and not least the entire financing of the project and our journey to participate in the competition. As such we are constantly on the lookout for new sources of support.”