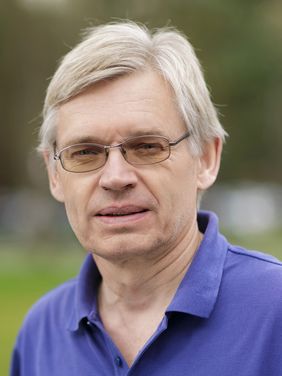 Prof. Peter Hegemann will receive the Honorary Doctorate Degree from the faculty of biology and preclinical medicine of the University Regensburg during their festive day of biosciences on thursday, June 27, 3.30 p.m. in H37, Universitätsstraße 31, 93053 Regensburg.  Details of the event can be found here.

Peter Hegemann is Professor and Head of the Department for Biophysics at the Humboldt University of Berlin, Germany. He is credited with the discovery and characterization of channelrhodopsins, a family of directly light-gated ion channels. Hegemann’s research focused almost entirely on the characterization of natural sensory photoreceptors, mainly from microalgae. Hegemann has characterized behavioral and photoelectric responses of the unicellular alga Chlamydomonas, a work that cumulated in the claim that the photoreceptors for these responses a rhodopsins that unify the sensor and ion channel in one protein. He has finally proven this concept with Georg Nagel by identifying the light gated channel channelrhodopsin, and its functionality in animal cells. His group characterized this proteins in molecular detail by a wide range of biophysical techniques, and the many mutants he generated in close collaboration with Karl Deisseroth lead to the deciphering of the ion channel mechanism, including gating and ion selection. This work was the basis for the discovery of Optogenetics, a technology where light activated proteins – first of all channelrhodopsin - allow to control selected cells of large networks as the animal brain with unprecedented precision in space and time just by application of light. Currently the Hegemann group also works on light-activated enzymes as the light-activated nucleotide-cyclases which further expand the optogenetic applications to important biochemical pathways. Dr. Hegemann is the recipient of the Wiley Prize in Biomedical Sciences (2010), the Karl Heinz Beckurts Prize (2010), the Zülch Prize (2012), the Gottfried Wilhelm Leibniz Prize, awarded by the German Research Foundation (2013), the Grete Lundbeck Brain Prize (2013), the Harvey Prize (2016), the Massry Prize (2016), the Gairdner Foundation International Award (2018) and the Rumford Prize (2019) for his extraordinary contributions related to the invention and refinement of optogenetics. He is a member of the German Academy of Sciences Leopoldina.