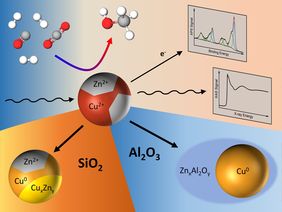 The current commercial production of methanol through the hydrogenation of the green-house gas CO2 relies on a catalyst consisting of copper, zinc oxide and aluminum oxide. Even though this catalyst has been used for many decades in the chemical industry, unknowns still remain. A team of researchers from the Interface Science Department of the Fritz-Haber-Institute of the Max Planck Society, the Ruhr-University Bochum, Stanford Linear Accelerator Center (SLAC), FZ Juelich and Brookhaven National Laboratory have now elucidated the origin of intriguing catalytic activity and selectivity trends of complex nanocatalysts while at work. In particular, they shed light on the role of the oxide support and unveiled how the methanol production can be influenced by minute amounts of zinc oxide in intimate contact with copper.

This work published in Nature Communications demonstrates that zinc oxide does not need to be available as part of the support, but that it still has a beneficial function even when available in highly dilute form as part of the nanoparticle catalyst itself. This will help elucidate the methanol synthesis catalysts better and potentially lead to an improvement of the catalyst for this important industrial process.