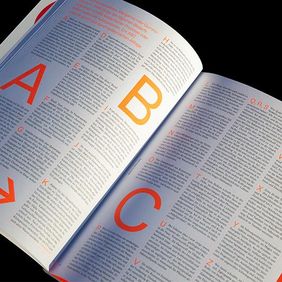 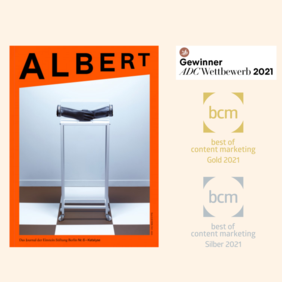 Albert No. 6 - Catalysis is the Einstein Foundation's award winning magazine about excellent catalysis research in the Berlin and Potsdam area.

Every year, another aspect of excellent research in Berlin is presented. This year's magazine focuses on catalysis, highlighting the excellent research of UniSysCat: Albert No. 6 - Catalysis. "What could there be more inspiring than a magazine about enabling and acceleration? Exactly this is catalysis." The booklet is full of tales about the exciting journey through the fascinating world of chemistry - among these interviews with UniSysCat researchers Maria Andrea Mroginski and Robert Schlögl or Nobel laureate Gerhard Ertl. Moreover, the reader may discover the history of the "grand acceleration", as Benjamin Steininger describes catalysis. These and many more stories about catalysis research are worth reading!

Albert No. 6 - Catalysis is award winning

Albert No. 6 - Catalysis has been granted a bronze award of the 2021 Art Directors Club (ADC Germany) contest for publishing. The ADC offers annual awards in the three categories Digital, Editorial and Design.

Moreover, the magazine has been awarded the gold Best of Content Marketing (BCM) Award 2021. The prestigious award has been preceeded by a silver BCM award. BCM is the largest competition for content-driven corporate communications in Europe.

We're happy that catalysis research gains so much attention. Congratulations to Albert No. 6 - Catalysis and to all UniSysCat researchers involved in its production!