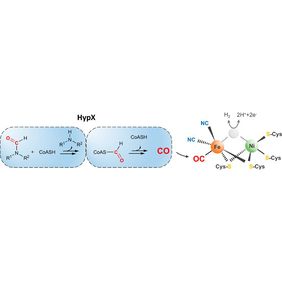 A research team around the UniSysCat scientists Oliver Lenz and Martin Oestreich uncovered the reaction mechanism of a novel biocatalyst involved in the synthesis of carbon monoxide. Carbon monoxide is one of the ingredients of the catalytic center of hydrogenases, which are involved in the cleavage and evolution of H2. The novel biocatalyst, called HypX, utilizes formyl-tetrahydrofolate – a common compound of the central carbon (C1) metabolism of living organisms – as the substrate and transfers the formyl group to coenzyme A to produce formyl-CoA. Formyl-CoA is then decarbonylated resulting in CO release. This is the third enzymatic reaction known so far that involves formyl-CoA.

Interestingly, this particular enzyme is not only present in hydrogenase-containing microbes. It is also widespread in mostly pathogenic fungi where it plays a so far unknown role. Moreover, it might be involved in the production of CO in the floats of a couple of seawater organisms (hydrozoans) that use these gas-filled organs to adjust their depth in the ocean. The most prominent member is probably the extremely poisonous Portuguese man’ o war.