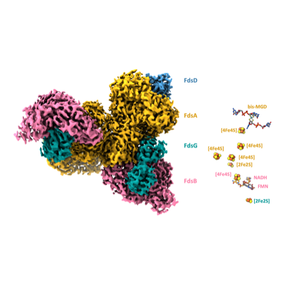 Formate dehydrogenases catalyze the reversible oxidation of formate to carbon dioxide. The enzyme could be used in hydrogen storage and CO2 reduction from the atmosphere and is therefore of interest for industrial and biotechnological applications.

RcFDH forms as a dimer, in which each protomer consists of four subunits, FdsA, FdsB, FdsG and FdsD. Formate oxidation takes place at the active site molybdenum atom of the  bis-metal- binding pterin (molybdenum or tungsten) guanine dinucleotide (bis-MGD) cofactor in FdsA. Electrons gained from this reaction, are transferred by a complex array of cofactors to FdsB, where they are used to reduce NAD+ to NADH.

In this study, the cryo-electron microscopy (EM) structure of the 360 kDa protein complex was solved at 3.3 Å resolution directly after purification in the as isolated state as well as after reduction with NADH. The two structures showed no differences in their cofactor arrangement and overall structure, however, it was possible to detect charge changes on the redox centers of the cofactors by comparing the two EM maps. Reduction of the bis-MGD and redox centers was also surveyed by using electron paramagnetic resonance measurements.

To find out more click here (link to publication).