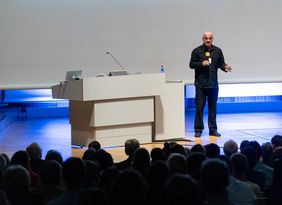 Prof. Matthias Drieß, Vize Spokesperson of the Cluster, was moderator during the event (c) Dominic Simon 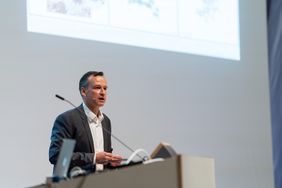 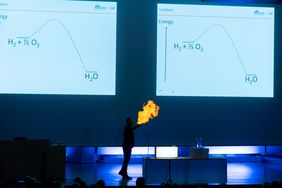 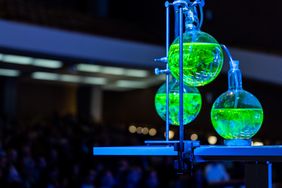 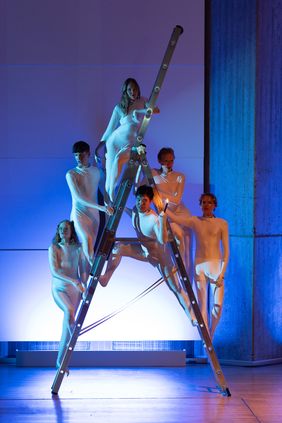 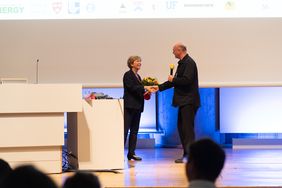 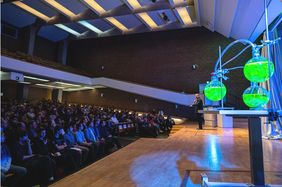 Logo of the main Sponsor BASF

As a big opening event on September 27, UniSysCat Cluster of Excellence of TU Berlin presented a multimedia science presentation and an artistic performance to the public. The big goal of the scientists of the nine participating institutions: The coupling of bio- and chemocatalytic processeses in space and time, paving the road for green chemistry. How this can succeed and why this affects every one of us, explained Cluster spokesman Prof. Dr. Arne Thomas, Professor of Functional Materials at TU Berlin, during the opening event.

With surprising experiments he demonstrated to the non-chemists among the approximately 700 guests, including the Berlin State Secretary Steffen Krach and Prof. Dr. Christian Thomsen, President of the TU Berlin, why catalysis research is not only highly relevant, but also needs to be rethought. 20 to 30 percent of the world's gross domestic product is generated by catalytic processes. 85% of all products in the chemical industry - from the dashboard to toothpaste - need a catalyst for their production. Every minute, millions of processes take place in the human body that would not be possible without catalysis. At the same time, catalytic processes also account for 80% of the total energy consumption of the chemical industry and 75% of their greenhouse gas emissions. "If we could manage to optimize these processes and learn from nature's resource- and energy-efficient processes, where many different catalytic processes are spatially and temporally coupled with no significant waste, we could make a significant contribution to the development of Green Chemistry and protecting the climate", says Arne Thomas.

UniSysCat also wants to strengthen the interaction between art and science, using its proximity to the University of Arts Berlin (UdK) on the Charlottenburg campus. In a performance developed especially for the cluster, students of the UdK have addressed the outbreak of researchers from normality by striving for new discoveries. The event was finished with a scientific lecture of Professor Dr. Cynthia Friend from Harvard University, MA, USA.

For the next seven years, UniSysCat receives about six million euros annually as part of the Excellence Strategy. Over 200 scientists are involved in the cluster. To date, more than 80 positions have been created for young researchers, junior research groups will be set up and new infrastructure has been built. With these activities, UniSysCat wants to set new standards in catalysis research.

In teaching, UniSysCat promotes innovative formats such as the student-centered "iGEM Synthetic Biology" project, where students develop a biological battery powered by photosynthetic cyanobacteria. Teachers, material and travel expenses, so that students can participate once a year in an international competition (BIOMOD) in San Francisco, are supported by the Cluster and the Society of Friends of the TU Berlin e.V.

Further focal points of the cluster are the science communication, the promotion of female scientists and multi-disciplinarity. The bridge to history and social science is constructed through a cooperation with Prof. Dr. Jürgen Renn from the Max Planck Institute for the History of Sciences in Berlin. Here, the historical significance of catalysis is highlighted.

UniSysCat especially thanks its main Sponsor BASF as well as Lanxess and Wacker Chemie for financial support of the event.