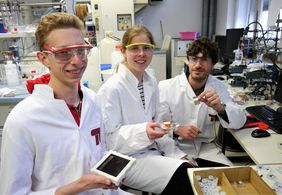 Florian, Anna-Noemi and Niklas (from l to r), in Niklas’ lab.

During the last weeks, Niklas Hausmann, BIG-NSE fellow and PhD student in the group of Prof. Driess, TU-Berlin, has been helping two students from the "Romain-Rolland-Gymnasium" ("RoRo"), situated in the Berlin district of Reinickendorf, further develop their “Jugendforscht” project in an attempt to win the next competition level.

The two RoRo students, Florian Krebs und Anna-Noemi Lotz, already submitted a primary version of their project, which title is “Solare Wasserstoffgewinnung – Energie für die Zukunft?”, some months ago. With this version, they were already able to get the first prize of the “Jugendforscht” competition on “local level” (“Berlin Mitte”).

March 27, they won at the next level of the competition, the regional one (Berlin).

On the national level they presented a further improved version of their project on at the Bundeswettbewerb 2019, which took place in Chemnitz from May 16 to 19, 2019.

There Florian and Noemi won the 5th prize on national level in the "Chemistry" competition! A huge congratulations to them and to Niklas! In addition to this success, they also won a special prize, offered by the Ernst A. C. Lange Foundation: An invitation to participate at the International Youth Science Forum in London, including a 14-day stay at the Imperial College, together with 500 young researchers from 70 Countries! There they will present their project with a poster. Last but not least they will also received an invitation by the German Chancellor Angela Merkel on September 4, 2019.