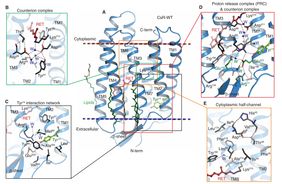 Reprinted with permission from AAAS.

“Our study unravels molecular details that differentiate light-driven ion pumps from light-gated ion channels. […] We conclude that the structural restraints differentiating  light-driven pumps from light-gated channels are less notable than  anticipated”, wrote the first authors Roman Fudim and Michael Szczepek from the groups of Peter Hegemann (Humboldt-Universität zu Berlin) and Patrick Scheerer (Charitè-Universitätsmedizin Berlin), respectively. In this collaborative study the authors designed and characterized a light-gated passive proton channel by structure-based genetic engineering of Coccomyxa  subellipsoidea  rhodopsin (CsR) which is originally a light driven proton pump. They employed electrophysiological and spectroscopic approaches. The authors showed that a specific hydrogen bond between Arg83 and Tyr14 contributes to the proton transport and the mobility of Arg83 forms a dynamic barrier to prevent passive conductance.

Their solved crystal structure of wild-type CsR at 2.0-Å resolution enabled the authors to identify distinct features  that determine ion transport directivity and voltage sensitivity. The authors concluded that substitution of Tyr14 with a glutamate would increase the attractive force between these two residues, resulting in a different configuration of Arg83. As the Arg83-Glu14 interaction, necessary  for passive conductance which requires deprotonation of Glu14, modulates during the photocycle, the  passive conductance overlaps with late photocycle steps mainly and is therefore switchable by light. In such way a structure-based approach is presented how to design ion-specific channels from microbial pumps as novel optogenetic tools. Furthermore it was shown that structural changes which are much smaller than generally expected, discriminate pump and channel properties correlated with active and passive ion transport, respectively.

*These authors contributed equally to the work