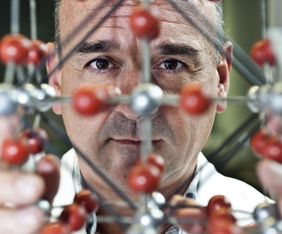 The central goal of the Chemical Invention Factory (CIF) – the John Warner Center for Start-ups in Green Chemistry – which was initiated as an independent center for start-ups at Technische Universität (TU) Berlin in 2018, is to enable the successful transformation of research findings into highly innovative spin-offs in the fields of green chemistry, materials science and nanotechnology.

“The center is to become a model for the promotion of junior researchers and technology transfer in the shape of an independent factory of the future,” says TU Berlin professor of chemistry Dr. Matthias Drieß, who jointly initiated the CIF with his colleague Professor Dr. Reinhard Schomäcker, both of whom act as scientific directors.

Although it has been about 20 years since the idea of green chemistry was first developed, it is still a comparatively young field of chemistry. The focus lies on the development of products that are harmful neither to health nor to the environment. One of the founders is John C. Warner, after whom the center is also named. In his 1998 publication “Green Chemistry: Theory and Practice”, he formulated the twelve guiding principles of green chemistry.

The starting point for the CIF at TU Berlin was the successful pilot project INKULAB. INKULAB gives students and researchers the opportunity to use free laboratory workstations to transform  innovative ideas in the field of chemistry into reality. TU Berlin’s Centre for Entrepreneurship supports students and researchers from the outset through a coaching and mentoring program that helps them take their first steps towards entrepreneurial independence. During the early stages of getting their start-ups off the ground, graduates interested in founding their own companies are provided with supervision immediately following their studies by lecturers from Technische Universität Berlin’s Institute of Chemistry.

INKULAB, financed by the Berlin Chamber of Industry and Commerce, emerged from the Berlin cluster of excellence UniCat (Unifying Concepts in Catalysis, 2007 to 2018), which conducted research into the similarities and differences of chemical and biological catalysis.

By (re)uniting biological and chemical catalysis, the UniCat cluster of excellence, based in Berlin and Potsdam, has introduced a new era of catalysis research in Berlin (see illustration). The CIF, which is developing this momentum on a larger scale in the pre-foundation area, is a sustainable structural measure of the cluster of excellence UniSysCat (Unifying Systems in Catalysis, 2019), which has recently been re-approved within the framework of the Excellence Strategy of the German federal and state governments. In addition, the future relevance of digitalization in chemistry will be incorporated into the teaching process. Starting in the winter semester of 2019/20, TU Berlin will initiate a data analytics program in cooperation with an industrial start-up partner.

The CIF, as a center providing start-ups with assistance in the earliest stages of their development, aims through the transfer of knowledge to smooth the path both for newly graduated entrepreneurs and intrapreneurs – meaning those in the forefront of thinking up new ideas within companies – towards founding spin-offs and developing innovative processes and products. With regard to external partners, the center is aimed at both industrial concerns and small and medium-sized enterprises. Bringing together target groups from academia and industry is a unique approach in Berlin’s promotion of junior researchers – and an innovative feature of the Chemical Invention Factory.

published (in German) in