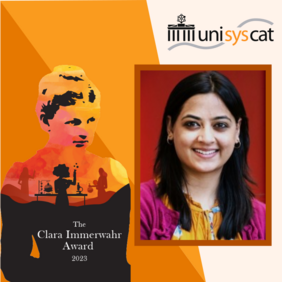 Dr. Reshma Rao from Imperial College London receives the 2023 Clara Immerwahr Award for her outstanding research in the field of catalysis.

Since 2011, the prestigious Clara Immerwahr Award has received numerous high-profile applications from excellent female scientists at an early stage of their careers. This year's Clara Immerwahr Award goes to Dr. Reshma Rao from Imperial College London for her outstanding achievements in catalysis research. Congratulations! The award is intended to support the study of a catalysis-related research topic during a research stay at UniSysCat with the aim of establishing close collaboration with UniSysCat working groups.

Reshma Rao obtained her PhD at the Massachusetts Institute of Technology in 2019 in the Electrochemical Energy Laboratory under the guidance of Professor Yang Shao-Horn. In 2018, for her PhD work, she received the ‘Wunch Outstanding Graduate Student Award’, awarded by MIT. After her PhD, Reshma did a postdoc in the Department of Chemistry at Imperial College London, co-advised by Professor James R. Durrant and Dr. Ifan E.L. Stephens. Since October 2022, she is a Royal Academy of Engineering Research Fellow in the Department of Materials at Imperial College London, where she is developing her own research group focusing on the operando characterisation of electrochemical interfaces. Reshma's research expertise lies in the use of X-ray and optical spectroscopy tools to study solid-gas and solid-liquid interfaces to understand catalytic active sites and reaction mechanisms.

"I have just started my independent research career as a Royal Academy of Engineering Research Fellow, and I am at the early stages of developing my research group. At this stage of my career, I believe the Clara Immerwahr Award offers me an unparalleled opportunity to develop new collaborations with researchers at UniSysCat, and thus shape my independent research trajectory." as Reshma says.

We are looking forward to an exciting and collaborative research exchange with Dr. Reshma Rao in the spirit of the Clara Immerwahr Award. All awardees have been role models to future female scientists and as such have inspired young women and girls to pursue a career in this field! Within UniSysCat, Reshma is planning to tackle one of the most pertinent challenges of this century – using renewable energy to produce green hydrogen via water electrolysis.