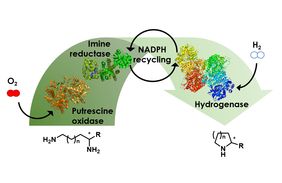 Enzymatic cascades enable the regioselective and stereroselective synthesis of fine chemicals and pharmaceutics in a series of coupled reactions, which is of core interest of UniSysCat. In a joined collaboration, the groups of Lauterbach and Nestl designed an enzymatic cascade for the H2-driven synthesis of nitrogen-heterocycles. Saturated nitrogen-heterocycles, especially pyrrolidines and piperidines, are attractive scaffolds for agrochemicals and pharmaceuticals. The newly developed enzymatic cascade included an O2-dependent putrescine oxidase, a NADPH-dependent imine reductase and an O2-tolerant NADP+-reducing hydrogenase. The incorporation of a hydrogenase made the reducing power of H2 available for biosynthesis. Enzyme engineering approaches were combined to optimize the specificity and activity of the putrescine oxidase from Rhodococcus erythropolis for the transformation of substituted diamines to the corresponding pyrrolidines and piperidines. The one-pot reaction resulted in up to 97% product formation. Furthermore, high selectivities up to 93% ee were obtained by exploiting the kinetic resolution of the putrescine oxidase. The prevention of organic solvents, toxic compounds or purification of intermediates demonstrates the “greeness” of this approach.