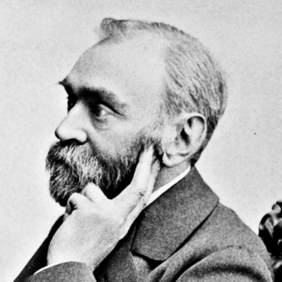 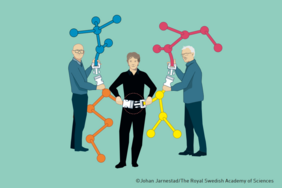 This year's Nobel Prize addresses a fundamental question in chemistry: How can molecules be assembled in the laboratory in a simple way? Even though chemists can build many large and complex molecules in the lab, a difficult problem is that complex molecules have to be built in many steps, with each step producing unwanted by-products. Chemists have long dreamed of easy methods to build ever more complicated molecules, for example for applications in pharmacy and medicine - and by developing the method of Click Chemistry, Barry Sharpless and Morton Meldal find a rather simple solution. With their method, they can easily link molecules together to build larger thereby avoiding the production of unwanted by-products. Thus, click chemistry is an example for a green chemistry approach that avoids waste. Carolyn Bertozzi developed click reactions that can be used inside living organisms: bioorthogonal reactions. She further developed click chemistry so that she could apply it in cells without disturbing the natural processes in the cell. Bioorthogonal reactions are now widely used to map how cells function.

Biochemist Carolyn Ruth Bertozzi is a professor at Stanford University, where she holds the Anne T. and Robert M. Bass Chair in the School of Humanities and Sciences. She is also a researcher at the Howard Hughes Medical Institute (HHMI) and former director of the Molecular Foundry, a nanoscience research centre at Lawrence Berkeley National Laboratory. She coined the term "bioorthogonal chemistry" for chemical reactions compatible with living systems.

Chemist K. Barry Sharpless has held the W. M. Keck professorship in chemistry at the Scripps Research Institute since 1990. Here, the Sharpless lab explores useful new reactivity and general methods for selectively controlling chemical reactions. He received the Nobel Prize for the second time. His first Nobel Prize was awarded in 2001 for his work on chirally catalysed oxidation reactions.

The Danish chemist Morten P. Meldal is a professor of chemistry at the University of Copenhagen in Denmark. He is known for developing the CuAAC (copper-catalyzed azide-alkyne cycloaddition) reaction, which is important in click chemistry. One of its goals is the synthesis of peptides and proteins from simple building blocks with his click chemistry approach.