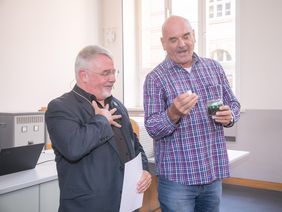 Prof. John C. Warner is an inspiring role model for UniSysCat's researchers. He is a chemist, an inventor, an educator, an entrepreneur and one of the founders of the field of green chemistry. In the ceremony on Monday, 5 September 2022, he held his inaugural lecture and received the certificates of his Honorary Professorship of Green Chemistry at the Institute of Chemistry at TU Berlin. His appointment underlines the importance of green chemistry in Berlin and marks a milestone in the promotion of green chemistry research and education at the TU Berlin. UniSysCat has excellent contacts with John Warner and will benefit greatly from his appointment. We are very pleased!

Scientifically, we benefit greatly from John Warner's inspiration and education. Green chemistry aims to invent new materials and synthesis routes that are resource-efficient and sustainable. In this context, UniSysCat's special approach is to learn from nature: By studying and understanding natural catalysts in detail, we learn how current catalysts could be improved using nature as a model.

Moreover, the researchers at UniSysCat as well as scientists and students in the Berlin area also gain from John Warner's founding spirit: As he says, excellent science is the essential factor in advancing green chemistry. And in Berlin, chemistry research has been conducted at a level of excellence for decades. So it comes, that in Berlin, the first incubation center for green chemistry in Germany will be built: The Chemical Invention Factory (CIF, John Warner Center for start-ups in green chemistry). It is named after Prof. John C. Warner, who is not only its spiritus rector, but also a member of its advisory board. With its focus on green chemistry, the CIF stands out in the established chemical industry.

We look forward to the upcoming collaboration with John Warner. He demonstrated his pleasure in sharing his scientific expertise and enthusiasm in a great way on 5 September. Photos of the event can be found in the UniSysCat media gallery.