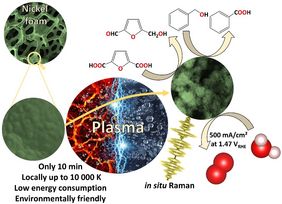 To achieve the energy transition, we need alternative fuels to replace conventional ones such as kerosene or gasoline. Fuels in general are energy carriers and thus can store and transport energy. Compared to other energy storage technologies such as batteries, the big advantage of fuels is that they can be stored in tanks and no resource and energy intensive batteries must be constructed. Their fundamental working principle is that they can be oxidized with oxygen (O2) from the atmosphere (burned), which releases their energy. In this process, atmospheric oxygen takes electrons from the fuel atoms and is reduced forming water and carbon dioxide.

To produce the required sustainable fuels, technologies must be developed that reverse the process of burning fuels or, in other words, giving electrons to oxygen: Electrons must be taken away from the oxygen and passed to abundant molecules to form fuels and close the cycle. In this regard, the key process is the oxygen evolution reaction (OER), where water is oxidized to oxygen and one gains electrons that can then be used to form sustainable fuels such as hydrogen (H2, in water splitting) or, e.g., alcohols (in the electrochemical reduction of carbon dioxide). Taking these electrons away from the water and passing them for example to protons (H+) to form H2 requires energy. If this energy was produced with sustainable sources, the fuel is green and carbon neutral.

During the OER and its fuel forming parallel reaction, O2 and the fuel are produced. The fuel is highly valuable, but the O2 has almost no economic value, as it is ubiquitous in our atmosphere already. To further improve this process, the OER can partly be replaced by other oxidative processes that produce value-added compounds such as the oxidation of biomass to gain precursors for green polymers. Then, simultaneously, the desired fuel and in parallel not O2 but the value-added green polymer precursor is produced.

To make all these oxidative processes applicable to industrial scale, cheap, robust, highly active, high-surface-area electrodes must be developed. In the current study involving the UniSysCat group leaders Dr. Ingo Zebger, Prof. Matthias Driess and Dr. Prashanth W. Menezes, an electrolytic, in-liquid plasma was used to directly modify the surface of a nickel foam electrode to obtain a hierarchically nanostructured electrode with a strongly enhanced surface area. The plasma process requires only 10 min, no toxic chemicals and little energy. The plasma treated nickel foam is a promising electrode for the aforementioned oxidative reactions, due to its large number of surface exposed sites, the possibility to modify it chemically after the plasma process while keeping the high surface area, its chemical and mechanical robustness as well as the quick, cheap, and environmentally friendly synthesis.

The authors apply this electrode for the OER and the value‑added oxidation of biomass to green polymer precursors required for, e.g., sustainable polymers from sugars. For both processes, the electrode shows a high and robust performance. For the OER, the performance is strongly enhanced, when the electrode is doped with iron. The doping was shown not to alter the hierarchical, high-surface-area morphology. In contrast, for the value-added oxidation, the iron-free electrode yielded a better performance. The different effects of the iron doping were rationalised using probing molecules combined with in-situ Raman spectroscopy, showing that both processes have the same initial reaction step in common, but require different adsorption energies for the following ones.

The study was picked as the „Editor’s Choice“ in Advanced Energy Materials. The authors anticipate that such robust, high-surface-area nickel foams can find application in many catalytic processes, especially when doped with the respectively suitable elements.