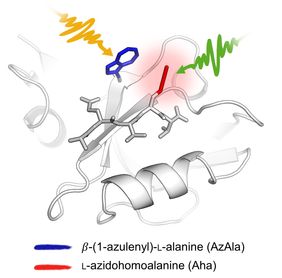 Proteins are ubiquitous in biological systems and carry out a vast range of cellular functions. Built from thousands of atoms, the biologically active state of a protein comprises a complex and intricate network of contacts. It has been shown that throughout such connections, energy flows with propagation velocities of 10 Å per picosecond. Correspondigly, anisotropic heat flow in proteins has been computationally studied using simulated injection of heat and subsequent tracking of the energy flow. Such studies indicated direct correlations of heat diffusion pathways and allosteric communication pathways.

As a fundamental phenomenon, allosteric communcation is involved in many important physiological and cellular functions, furthermore intertwined with several human diseases. It is for example involved in signal transmission in protein structures, ranging from short to long distances. This way, a protein domain can for example “sense” the presence or binding of ligand and modulate the function of a distant catalytic domain. Importantly, allosteric information transfer in proteins has been linked to distinct pathways of vibrational energy transfer (VET).

Two UniSysCat research groups joined their efforts to obtain experimental evidence for VET in proteins. In computer simulations, mapping energy transfer is fairly easy - but experimental evidence is largely missing due to the lack of suitable spectroscopic probes. Purpose of the donor and acceptor probes is to inject energy into the protein and to track it’s arrival at a distant protein site. For enzymes, the catalyzed chemical reaction often releases energy within the enzyme active site. This energy also is believed to be dissipated anisotropically, so studying VET is expected to have important implications for understanding and optimizing enzymes and the reactions they catalyze.

A suitable probe funtional as an ultrafast heater in protein structures is the tryptophan analog β-(1-azulenyl)-L-alanine (AzAla). When excited at 600 nm, this non-canonical amino acid (ncAA) undergoes ultrafast internal energy conversion. Installed in a protein, it thus allows the injection of vibrational energy. As sensor, a second ncAA in form of L-azidohomoalanine (Aha) was chosen. Via ultrafast IR-spectroscopy, it emmits a characteristic signal well seperated from the native protein and peptide responses.

Towards the first experimental VET measurements based on the ultrafast heater, the group of Prof. Nediljko Budisa from Technische Universität Berlin first developed an enzyme for the precise installation of AzAla in recombinant proteins. Via stop codon suppression, this enzymes enables the site-specific installation of the synthetic amino acid during ribosomal protein synthesis. How this engineered biocatalyst binds its substrate was revealed by the second UniSysCat group, the structural biology team of Dr. Berta Martins and Prof. Holger Dobbek from Humboldt-Universität zu Berlin, by solving the crystal structure of the enzyme-substrate complex. Next, PDZ3, a protein interaction domain of the postsynaptic density protein 95 was produced in bacteria with site-specific incorporation of AzAla. A modified PDZ ligand was chemically synthesized and equipped with Aha as VET sensor. Pairing protein and peptide ligand, the biophysicists team of Prof. Dr. Jens Bredenbeck from the Goethe University in Frankfurt were able to observe VET using ultrafast IR spectroscopy. Energy injected into the protein at defined AzAla sites was monitored to arrive at the Aha sensor on a picosecond timescale.

The presented study shines light on how energy is directionality transported from one protein site to another, now enabling the mapping of energy pathways in a broad range of proteins. This will help to elucidate the role of VET in protein dynamics - how enzymes work and how their biocatalytic activity is regulated.