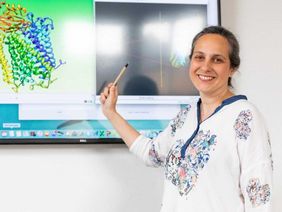 Prof. Maria Andrea Mroginski has been professor of modeling for biomolecular systems at TU Berlin since 2009. © Felix Noak. 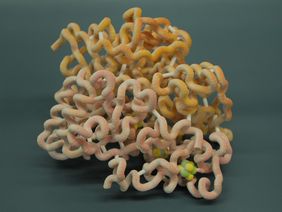 UniSysCat member Prof. Dr. Maria Andrea Mroginski was interviewed for "TU intern" about the simulation of catalysts for the energy transition. She explains the relevance of theory for the catalysis research of the future. The interview has been contucted by Wolfgang Richter and appeared in the 3rd issue of the magazine "TU intern" in June 2022: https://archiv.pressestelle.tu-berlin.de/tui/22juni/#6. The English translation can also be found on the website of the TU Berlin.

Professor Mroginski, there is an object under glass at an exhibition at the Humboldt Forum, which at first glance looks like a messy serving of fusilli pasta. What exactly is it?

I always say it's spaghetti (laughs). But you're right, it actually looks more like spiral noodles. It’s actually a model of an enzyme, a hydrogenase. It represents our UniSysCat Cluster of Excellence in the Humboldt Labor.

What is so remarkable about hydrogenase that it is included in the exhibit?

Hydrogenase can divide a hydrogen module into two individual, positively charged hydrogen ions and two electrons. It can also prompt the reverse reaction to form a hydrogen molecule. In the first instance, energy is released in the form of electricity, while in the latter it can save electricity and thus energy in the form of hydrogen. The hydrogenase remains unaffected during both of these processes and functions as a catalyst.

Such properties make hydrogenase seemingly ideal for applications in the energy transition. Was it designed especially for this purpose?

No, it actually naturally occurs everywhere, such as in the bacteria Ralstonia eutropha, where it also splits the hydrogen essential for the bacteria’s life processes. We aim to improve the efficiency of hydrogenase and make it suitable for industrial use as a catalyst.

Generally, when we hear the word catalyst we don’t think of biology but rather something like catalytic converters which use metal to render the exhaust gas in cars harmless.

Hydrogenase does indeed contain metals! Nickel and iron atoms are located at the active center of this large molecule. Currently, we are trying to gain a detailed understanding of how hydrogen splitting or synthesis occurs. However, you are correct. There are two main areas of catalyst research: chemical catalysts, like those in cars, and biological catalysts like enzymes. When it comes to enzymes, we often don’t fully understand how they work.

As a a theoretician, you don’t conduct experiments in the lab. What exactly is it you do?

We try to simulate the properties of complex biomolecules. Hydrogenase, for instance, has approximately 5000 atoms. We can learn a great deal by predicting its behavior and comparing this with experimental data. Modern graphics cards play an important role here, as they can quickly calculate complex reaction dynamics. Of course, we make simplifications wherever possible. Sometimes classical mechanical laws are sufficient. Other times, we have to apply quantum mechanics, which ultimately determines all processes in the microcosm. However, we can solve equations precisely only for very small molecules, meaning there are a large number of approximate solutions. The art is knowing when to apply which approximations.

Isn’t this an instance where artificial intelligence could be useful?

Indeed. One of my colleagues in UniSysCat, Dr. Tobias Gensch, has just built a large database of active centers containing phosphorus with the help of machine learning.  On the basis of 1,500 known bonds, he was able to predict the properties of 300,000 new variants of such active spots. This is an incredible help when designing tailor-made catalysts.

What are your next aims regarding hydrogenase?

I am working with several other researchers in UniSysCat to combine hydrogenase with enzymes, which, among other things, process carbon dioxide. This would allow us to create useful hydrocarbons from carbon dioxide. We also still need to get the enzymes on the surface of electrodes, but it remains unclear how they interact with different surfaces.