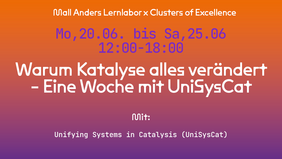 From 20 to 25 June, UniSysCat presents itself and its research. 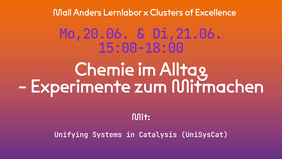 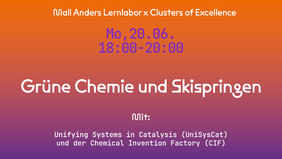 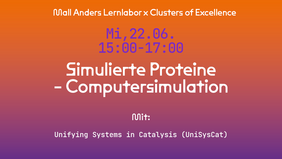 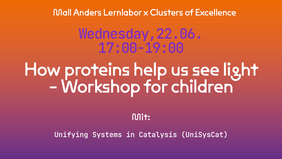 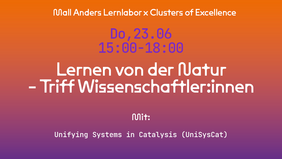 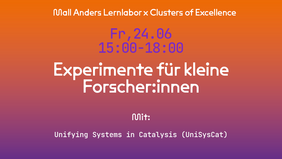 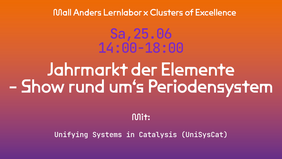 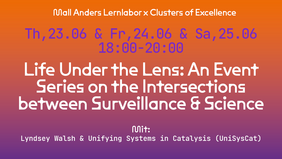 You've never heard of catalysis? Well, it's about time! Because catalysis is everywhere: your T-shirt, your smartphone and your sunscreen are all made using catalysis methods. UniSysCat researchers show you what catalysis is and how it will change our world in the future. The Cluster of Excellence "UniSysCat - Unifying Systems in Catalysis" presents itself from 20 to 25 June in the Mall Anders.

There is something for all research enthusiasts or those who want to become one: experiments to participate in and marvel at, workshops for children and young people - but also scientific input from researchers from UniSysCat. The grand finale is on Saturday afternoon: a show about the periodic table of the elements. Dive into the world of chemistry, biology and physics! Let yourself be inspired by catalysis research!

The whole week UniSysCat will be present with different exhibits in the Mall Anders: With the catalysis mini-golf you can learn what catalysis has to do with energy. Press the buttons on the interactive biomembrane to learn how bacteria and plants convert sunlight into useful energy. In the catalysis computer game, you click from level to level and find out how a catalyst works. There will also be workshops and shows - a brief overview:

Mon, 20 June, 3-6 pm: Chemistry in everyday life? Experiments to join in - Part I
Is this red cabbage or blue cabbage? How can you blow up balloons without blowing into them? We will answer these and other questions at our experiment stand. We cordially invite children and their parents to join in the experiments. With Stefan Schutte, Andrea Hollmann and Paula Nixdorf froom TU Berlin.

Mon, 20 June, 6-8 pm: Green Chemistry & Ski Jumping
Why is chemistry green and what does it have to do with ski jumping? This question will be answered by selected start-up teams from the Chemical Invention Factory at TU Berlin. With Martin Rahmel, Tino Mundt and more.

Tue, 21 June, 3-6 pm: Chemistry in everyday life? Experiments to join in - Part II
Did you miss Monday's experiments? We invite you to experiment again today.

Wed, 22 June, 3-5 pm: Simulated proteins
Dive into 3D models of proteins and let Nadia and Jovan explain to you how they work! Nadia Elghobashi-Meinhardt and Jovan Dragelj explore how proteins are built, how they behave and what can be learned from them

Wed, 22 June, 5-7pm: A Science Workshop on proteins helping us see light
Workshop in English for teens: Our eyes have special colorful proteins which give us the ability to see the colors of the world. We will learn about the physics of color detection and how these proteins have color. Finally we will use actual lightsensing proteins extracted from microbes to create a colorful pendant to wear. With Alina Pushkarev. Registration to: alinadrusilla@gmail.com

Thu, 23 June, 3-6 pm: Learning from nature - Meet scientists
What do the researchers in UniSysCat actually do? They learn from nature! Sabine explains how bacteria and
plants convert sunlight into usable energy. She has brought an interactive model with her. Cornelius' experiments and calculations are the basis for a precise understanding of such processes. With Sabine Oldemeyer and Cornelius C. M. Bernitzky .

Fri, 24 June, 3-6 pm: Experiments for little researchers
Experiments to join in: Here you will get a first insight into scientific phenomena and the world of chemistry.  Why is there always so much ketchup out of the bottle all at once? How much energy do I actually need to play minigolf? play miniature golf? Come along and get the the answers! With JCF Berlin, Taban Mottale and Jan Dirk Epping.

Sat, 25 June, 2-6 pm: Fair of the Elements - A show all about the periodic system
The grand finale of the UniSysCat week in the Mall Anders: Together with the Elemonsters, UniSysCat invites you to a special fair. At their stalls you can get to know the periodic table of the elements. Grab a helium balloon, admire our collection of elements, try your luck at element bingo and let Silizius guide you through the magical world of chemistry.

Thu, 23 & Fri, 24 & Sat, 25 June, 6-8 pm: Life Under the Lens: An Event Series on the Intersections between Surveillance and Science
With the use of cookies, data tracking, and more, external surveillance has had an increasingly pressing gaze on our lives. This event series sets out to examine and question the role of surveillance in society and science and the impact it has on our personal lives. https://lyndseywalsh.com/, @artexvivo (Twitter & Instagram)

The venue is the premises of Mall Anders, a pop-up science lab on the ground floor of the shopping centre "Wilma Shoppen. Mall Anders sees itself as a temporary learning laboratory: it leaves the spatial context of the university buildings with the aim of increasing openness and networking with urban society. Since the end of 2021, the doors of the experimental space have opened for a wide range of interactive events on various topics such as social urban development, the future of teaching at universities, sustainable consumption and production and much more.

All events at Mall Anders are free of charge and without registration.