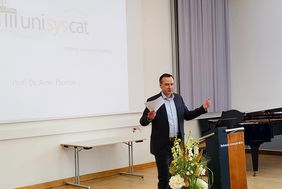 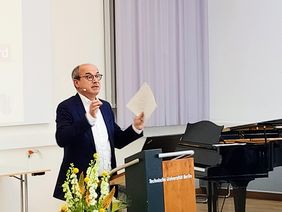 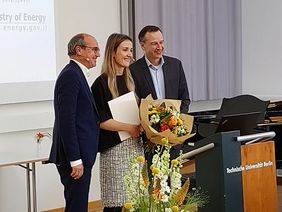 For her outstanding research, the Cluster of Excellence Unifying Systems in Catalysis (UniSysCat) at TU Berlin presented Dr. Charlotte Vogt from the Technion Institute of Technology (Israel) with this year's Clara Immerwahr Award on 3 June 2022. The award winner gave a lecture on "A new generation of fundamental understanding in catalysis". Afterwards, the actress Anita Zieher from the Potraittheater Wien presented her play "Meeting Lise Meitner".

Charlotte Vogt is convinced that the problem of climate change can be solved through catalysis. With the help of catalysts, harmful greenhouse gases can be converted into useful substances, such as fuel. However, the catalysts currently used for this conversion are often inefficient. Charlotte Vogt is therefore researching new, efficient catalysts at the Technion in her working group "The Vogt Laboratory of Catalysis for Fuels of the Future". To this end, she is developing new types of spectroscopic experiments with which she can even watch catalysts "at work".

"With my research, I want to help develop new catalysts and better processes to get away from fossil fuels and curb climate change," Charlotte Vogt explains the goal of her work. She told the Berliner Zeitung in an interview: "It is a very significant and beautiful prize for me. Clara Immerwahr was a great scientist, and yet her life story is incredibly sad."

The Clara Immerwahr Award has honoured young female scientists for their outstanding research in the field of catalysis every year since 2011. It is endowed with 15,000 euros and invites the award winner to collaborate with UniSysCat researchers. The prize honours the research of Dr. Clara Immerwahr, who in 1900 was the first woman in Germany to earn a doctorate in physical chemistry at the University of Breslau. This year, the prize is financially supported by BASF.