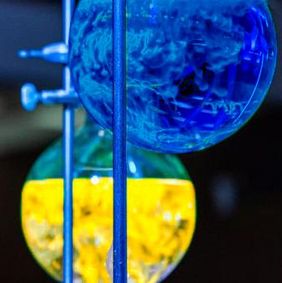 The global peace order is most dangerously threatened since the Russian invasion of Ukraine on February 24, 2022. Scientists and scientific organisations around the world have clearly positioned themselves against this unjustified war in Ukraine. UniSysCat condemns Russia's aggression, which is expressed in the attack on Ukraine in violation of international law.

UniSysCat is ready to help scientists who have fled the ongoing war in Ukraine to Germany. We call on Ukrainian researchers in related fields to get in touch if they are interested in joining one of the UniSysCat working groups. Our research group leaders are happy to host Ukrainian scientists and the participating institutions in UniSysCat offer a range of support services, such as fellowships or free work spaces. We are happy to support the coordination of possible collaborations.

In particular, we would like to draw your attention to a joint networking event of Berlin's universities and non-university research institutions, that will take place on June 30, 2022 at Berlin-Brandenburg Academy of Sciences and Humanities (BBAW), Jägerstraße 22/23, 10117 Berlin. Berlin4Ukraine: Meet & Learn - A networking event for exile researchers (free registration under: https://events.wzb.eu/ber4ukr/) will be a half-day event aiming to convey basic knowledge of the structures and key players of the German Science System, to explain the key support offers for refugee researchers and scholars at risk in particular, as well as the system of German science funding in general. UniSysCat will contribute to this event. This is an ideal opportunity if you want to get in touch with some of our scientists and researchers.

The event is intended to provide a networking opportunity for researchers from Ukraine and from Berlin and could also be followed via live stream. It is a collaboration by Berlin Research 50, the Berlin University Alliance, the Berlin Brandenburg Academy of Sciences and Humanities, the Clusters of Excellence SCRIPTS, NeuroCure, UniSysCat, and Temporal Communities, as well as the German-Ukrainian Academic Society.

A detailed programm will be available very soon. For further information, and if you have any questions, please contact the team of the UniSysCat office via info(at)unisyscat.de .