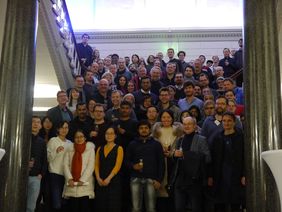 Members of UniSysCat during the general meeting Jan 11, 2019 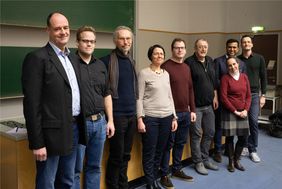 Spokespersons and members of the executive board of the Einstein Center of Catalysis. (c) TU Berlin/PR/Romina Becker

"The aim of the UniSysCat Cluster of Excellence is to understand in principle how starting materials, intermediates and reaction products come into contact with various catalysts involved in order to react as efficiently as in a living cell.", Explains Prof. Dr. Arne Thomas, the newly elected spokesperson for the cluster. UniSysCat will hold a key position in the development of green chemistry in Germany, building on the excellent work of UniCat, the precursor cluster of UniSysCat. "In many cases, individual catalytic reactions are already well understood, and now it is important to decipher reaction networks in chemical and biological catalysis in space and time in order to be able to control, simulate and modify them", says Prof. Dr. Peter Hildebrandt, TU Berlin, spokesperson of EC².

Nature creates a coexistence of many different chemical reactions in a confined space, conserving resources, exploiting synergies and making chemical reactions greener and much more efficient than the industry has been able to do so far. Conventional industrial production, on the other hand, performs one production step after another, as in a linear chain. "In a single plant cell, a number of reaction chains can run at lightning speed, and we would need a hundred-meter-long industrial plant in production," explains Matthias Driess, vice spokesman for UniSysCat.