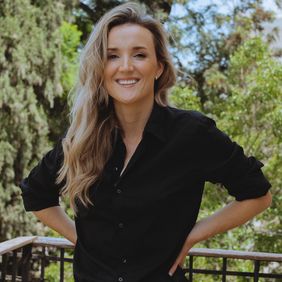 UniSysCat awards Dr. Charlotte Vogt from Technion Institute in Israel for her research in the field of catalysis. The Award Ceremony will take place at the Technische Universität Berlin on June 3, 2 pm. Recently, the awardee Charlotte Vogt spoke with Elena Matera from the Berliner Zeitung about saving the climate with catalysts and why women have a hard time in research. Please find the original article on the website of Berliner Zeitung.

How can we stop climate change? This is a question that scientist Charlotte Vogt also addresses in her work. Her answer: with chemistry. The 30-year-old scientist is currently researching new catalysts in Tel Aviv that are supposed to stop global warming, and heads her own working group there. For her work, the Dutch-born researcher will receive the Clara Immerwahr Award from the UniSysCat Cluster of Excellence at the Technische Universität Berlin this year. A conversation about saving the climate with catalysts, why women still have a hard time in science and how the younger generations could bring about the decisive changes.

Charlotte Vogt, Clara Immerwahr was the first woman to obtain a doctorate in physical chemistry in Germany in 1900. At the age of 30. You are being honoured with the Clara Immerwahr Award this year - and you are also 30. How does this feel for you?

It is a very meaningful and beautiful award for me. Clara Immerwahr was a great scientist, and yet her life story is incredibly sad. I was talking about her with my students just the other day. Clara Immerwahr was married to the famous chemist Fritz Haber. They had a son and in the end she had to give up her career in research. Not being able to do research any more and instead being a housewife and mother - that made her unhappy. It was probably one of several reasons why she committed suicide. A woman having to give up her career still happens and reminds me of my surroundings.

I am from the Netherlands, and Northern Europe is more conservative than one might think. It is often the case that women are still told: You become a mother and then you stop working or have to work less. I also grew up in such an environment myself. Moreover, there is too little support when women have children. And then there is a lack of role models. I didn't know any woman in my immediate environment who had worked as a scientist in a higher position - and I I think many women feel that way. They don't even get the idea that this could be an option. Without my father, who is a chemist, I wouldn't have known what it meant to work in science.

So your father got you into chemistry?

No, it was actually my mother. She told me to study a STEM subject, otherwise she wouldn't pay for my studies. Because yes, mothers know what suits you and I have always been very ambitious, I love challenges. And studying chemistry was definitely a challenge, especially the Bachelor's studies. I struggled a lot with it in the beginning.

I didn't like sitting still and learning all the basics, in maths, physics. The first years were hard and I wasn't very good either. Then in the third year I had catalysis, which is the field I also work in now, and finally I enjoyed it and got good grades because of it.

After that, you did your Master's degree in chemistry and business management and worked in a large chemical company. Why did you then go on to do a doctorate?

One of the mentors I worked with told me: "Even if you work in a chemical company and you are ambitious, there will be a glass ceiling. People will put a lot of limits on you, especially if you are a woman. But if you get the highest education possible, you can stand up to it. I had not even considered doing a doctorate myself. Then I did some research, took the risk and it was definitely the right step.

You head your own research group at the Technion Institute of Technology in Israel. Your goal is to stop climate change with the help of catalysts. Can you briefly explain what catalysts are?

A catalyst is a  chemical substance that can make things happen chemically that would otherwise not happen - it is effectively a chemical magic wand. Catalysts accelerate the speed of a chemical reaction without being consumed themselves. So the reaction happens much faster and thus costs less energy. Catalysts are involved in about one third of the entire global gross domestic product. 90% of the chemical industry use catalytic processes: from oil refineries to the food industry.

And how can these catalysts now mitigate climate change?

Ultimately, the central problem of global warming is the rising CO2 content in the atmosphere. So one possibility is that we don't let into the atmosphere the CO2 produced in large industrial plants, but convert it into something useful with the help of catalysts, for example into fuels. However, the catalysts we have are often not good enough: for instance, they cannot convert all the CO2. And they usually produce not only the product we want, but also many by-products. The result is that these processes are not yet economical.

And you are trying to improve these processes?

And when could all these technologies be implemented?

It always takes a long time for such new technologies to become established. Even if we make a breakthrough tomorrow, it would take decades before we can use them on a large scale. But if we can use CO2, which we currently still see as "waste", or surplus solar energy in a meaningful way, that would be a huge step forward. And it would also make economic sense to convert CO2 into something useful. But it's also important to keep pushing all these things like renewable electricity, electrification of private vehicles and research into sustainable technologies like fuel cells. We also have to start developing not only CO2-neutral fuels, but we also have to ensure negative CO2 emissions.

Can you explain that in more detail?

In CO2-neutral conversion processes, we take carbon dioxide from the air and turn it into fuel, for example. If you burn the fuel again, the CO2 returns to the air. So nothing is added, but nothing is taken away either - the CO2 content remains neutral. For negative CO2 emissions, we actively take the carbon dioxide out of the atmosphere and store it in the soil, for example. So we are actively taking CO2 out of the atmosphere, so the balance is negative. And we definitely have to develop the technologies for negative CO2 emissions.

In your opinion, is enough being done politically to invest in such technologies and to advance climate protection?

I always find it difficult to evaluate politics. I am a scientist and I like it when you can clearly determine something, when you can work with numbers. Politics has far too many variables. The only thing I can fall back on is my knowledge of the past and my faith, my optimism in human ingenuity. I mean, we have developed important technologies in the past. But mostly this has been done under pressure because there was a need. With carbon dioxide emissions, it's a bit more difficult.

We will only feel the effects of the CO2 emissions we emit today in ten years. That is dangerous, because people will realise the effect of the emissions when it is already ten years too late. That is why it is so important that we start actively developing technologies and implementing climate protection measures today. And we are already seeing a really drastic increase in severe weather events.

But technologies alone will probably not be enough to stop climate change. Ultimately, we also have to change our way of life. Or how do you see that?

Yes, the meat industry, flying, but also the high plastic consumption are of course harmful to the environment. And we should limit these things. But in the end, the real change will come from the basics, that is, from the way we produce materials and things. Because at the end of the day, there will be around 12 billion people on the planet in 2100 and they will still need materials in the future, even if you reduce consumption. We need to fundamentally change chemistry to stop climate change. And the past proves that we humans can make such a change.

Can you give an example?

I like to compare it to the Middle Ages, when there was no sewage system. Humans threw everything on the street, our rubbish, and they got sick. People got cholera, and then they thought: maybe it's not such a good idea for me to throw a bucket of faeces on my neighbour's head. Maybe we should build a sewage system. And that's basically what we're doing now. We throw away everything we produce. We are emitting CO2 into the air. So metaphorically speaking, we still lack the sewage system. Yes, such a system costs a lot of energy and money. But it is essential for our health, our future.

But do you think it's so clear to everyone that we need to change something?

I think we have already understood the essentials. And I am especially optimistic about the younger generations, the climate activists, like Greta Thunberg, but also the students at my university. Most young people are now aware that climate change is a big problem and that we have to tackle it, change something. Actually, almost all of my students who are under 25 want to work on sustainability issues. It's incredibly nice to see this whole brilliant generation of young people wanting to do research on this very thing. Of course, not all of them are focused on it. But you can clearly see that climate and sustainability in particular are topics that young people are increasingly concerned with. That can only make me optimistic.

Is that what also fulfils you in your daily work?

I always thought that being a scientist would mainly be about publishing one paper after the next. But at the end of the day, working with my students is what I really love, teaching them science and seeing them develop into individual thinkers, getting them excited about research. I think that should also be the real legacy of a good scientist, on the one hand to do research themselves, of course, but also to bring in new, outstanding scientists who develop solutions - like new catalysts.

The interview was conducted by Elena Matera.