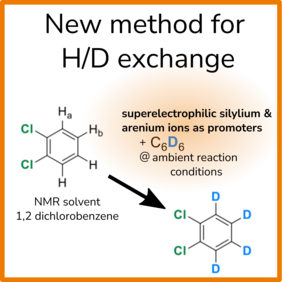 Deuteration is a chemical process in which hydrogen atoms (H) in a molecule are replaced by deuterium atoms (D). This exchange nearly does not change the chemical properties of the molecules, but does change its physical properties – which is very nice for certain applications. For instance, hydrogen and deuterium are very different in their magnetic properties. Thus, it is possible to distinguish them by NMR spectroscopy.

Deuterated compounds are in high demand, for example in the life sciences and in physical organic chemistry. Hence, the development of effective deuteration methods is an active field of research. In their current study, Tao He, Hendrik F. T. Klare and UniSysCat group leader Prof. Martin Oestreich introduce a new deuteration protocol by which expensive or noncommercially available NMR solvents such as 1,2-dichloro- and 1,2-difluorobenzene can be prepared.

„Together with our long-standing interest in the chemistry of silylium ions, we were curious to see whether stronger molecular superacids could be used to realize the perdeuteration of electron-deficient aryl halides. Furthermore we wondered if silylium ions, usually perceived as “fat protons”, could also be engaged as promoters. With these questions in mind, we investigated the superelectrophilic silylium/arenium-ion-promoted deuteration of deactivated aryl halides under ambient reaction conditions using inexpensive C6D6 as the deuterium source.“, as the authors write in their publication.

With their new approach, the authors reached excellent deuteration degrees. Aside from the deuteration of electron-deficient aryl halides, the new deuteration protocol can be also expanded to the perdeuteration of other arenes. The authors furtermore demonstrated the scalability of their new protocol, which is important for application, and reached a deuteration rate of 1,2-dichlorobenzene of 90% after one cycle and 99% after two cycles.