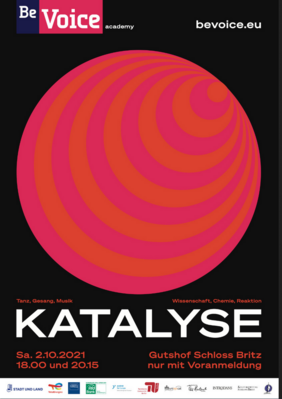 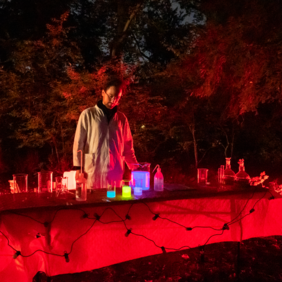 On September 30th, 2021, an exceptional event took place in the garden of Schloss Britz in the heart of Berlin-Neukölln. Science and dance merged in an amazing liason - and UniSysCat was part of it. The German-Dutch art-project BeVoice presented a workshop on catalysis: As usual in BeVoice projects, science had been converted into dance and song. The scientific topic was the source of inspiration for choreographies, song texts and compositions, whereby the young people themselves provided the ideas.

The project presented on September 30th was called “Catalysis”: Sometimes you need outside help to accelerate a process or to make it possible at all. Not just in chemistry! UniSysCat supported the event in Neukölln with exhibits and presentations on the subject of catalysis, for example, laboratory experiments to look at and touch as well as a catalytic mini golf. Dr. Jan Epping from the group of Prof. Matthias Driess and his team accompanied the event on behalf of UniSysCat and the Technical University Berlin.

René M. Broeders, initiator and artistic director of BeVoice, found wonderful words to explain catalysis: "In chemistry you need an extra substance to accelerate a reaction, or to make it possible at all. We humans sometimes also need a catalyst. The matchmaker, the person who makes us laugh or the one who learns something from us. Catalysis is never far."

What is BeVoice? In a nutshell: René M. Broeders brings together schoolchildren from Berlin with young artists from choreography, dance and composition from the Netherlands. BeVoice is a German-Dutch success story full of music, dance and enthusiastic young people. The idea: Around 50 schoolchildren from Neukölln meet 20 people of the same age from the Netherlands. In a project week, the participants not only get to know each other, but also everything that belongs to a professional stage performance.