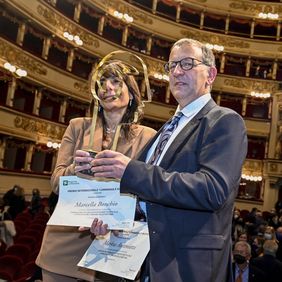 Together with Marcella Bonchio and Pierre Joliot, Markus Antonietti, UniSysCat member and director at the Max Planck Institute of Colloids and Interfaces in Potsdam receives the international award "Lombardia è Ricerca" for his contribution to artificial photosynthesis.

Scientists around the world are working on different solutions how to mitigate climate change - one of the greatest problems of our time. Climate-damaging gases in the earth's atmosphere, especially CO2, provoke that our planet is constantly warming, which has devastating consequences for our ecosystem. The recovery of CO2 from the atmosphere, based on the photosynthesis of plants, is a promising method of counteracting or slowing down global warming. The process called "artificial photosynthesis" moreover offers the chance to generate clean energy, in particular green hydrogen. For this process, Markus Antonietti and his international colleagues have studied, mimicked and further developed the mechanisms of natural photosynthesis.

In the framework of artificial photosynthesis, Markus Antonietti and his research team developed inexpensive and sustainable catalysts. These can convert the energy of sunlight into molecular processes that are otherwise only known from biology. As in a plant, oxygen and fuel molecules such as ethanol are obtained from water and carbon dioxide. "The carbon dioxide fixation of our process is already much higher than that of trees," says Markus Antonietti.

For this achievement, Antonietti now receives the "Lombardia è Ricerca" award together with Marcella Bonchio and Pierre Joliot. All three have been working on the development of processes for clean energy generation using "artificial photosynthesis" based on nature's example. The award winners worked together in various research areas to understand photosynthesis and to artificially maximize its efficiency.

Since 2017, the "Lombardia è Ricerca" research prize has been awarded for the best scientific findings in the field of natural sciences. The prize is endowed with 1,000,000 euros. The jury consists of 15 top international scientists. Markus Antonietti is the second winner from Germany.