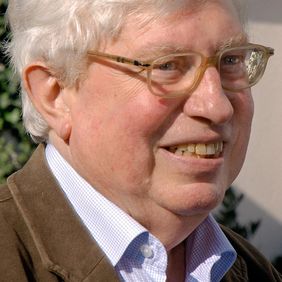 Prof. Gerhard Ertl is not only a pioneer of surface chemistry, he is a great role model for the researchers of UniSysCat. He turned 85 on october 10th and UniSysCat warmly congratulates! The history of UniSysCat and the previous cluster of excellence UniCat, is closey linked to the scientific success story of our spiritus rector Gerhard Ertl.

It is already 16 years ago: In 2007, on his 71st birthday, Gerhard Ertl received the call from Stockholm. He was awarded the Nobel prize in chemistry for his studies of chemical processes on solid surfaces. In the same year, the catalysis research project UniCat was approved as a cluster of excellence and the researchers were able to start work. The success of UniCat is certainly influenced by the honor and spirit of Gerhard Ertl and his pioneering ideas. The office of UniSysCat and the graduate school EC2/BIG-NSE are located in the Gerhard-Ertl Center on the campus of the TU Berlin named after UniSysCat's spiritus rector.

Ertl studied interfaces between solids and gas phase and gained important new insights for heterogenous catalysis. He was a real pioneer in this field and had to invent completely new approaches. Even at the age of 85, his thirst for knowledge does not let him rest. Now and then he still drives to his office at the Fritz Haber Institute or works from home. Ertl's hope is “to make chemistry more sustainable on the basis of catalysis research and to advance the energy transition,” he says. "But the big breakthrough has not yet happened."

Gerhard Ertl just published an autobiography "Mein Leben für die Wissenschaft", GNT-Verlag Berlin. Besides being a world-class scientist, Ertl is also a talented pianist, as he demonstrated at a Mozart concert on the occasion of his 78th birthday.