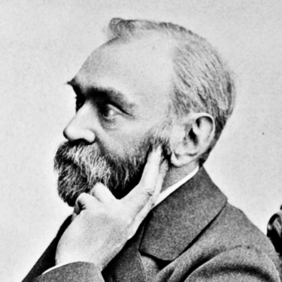 Alfred Nobel. The Nobel Prize 2021 goes to Benjamin List and David MacMillan for the development of asymmetric organocatalysis.

The Nobel Prize in Chemistry 2021 goes to Benjamin List and David MacMillan, who independently developed a new group of catalysts that are widely used in the chemical industry today. Their method, asymmetric organocatalysis, made chemistry more environmentally friendly and enabled the design of new drugs, as the Nobel committee justifies their decision.

Benjamin List is Director at the Max Planck Institute for Coal Research in Mülheim an der Ruhr. David MacMillan is now a professor at Princeton University. They are pioneers in a new field of catalysis. They had the idea to use small organic molecules for catalysis. Until then, scientists knew only rather complex organic molecules with catalytic activity, namely enzymes present in living things. On the other hand, catalysts used in the lab or in industry typically contain metals that are either rare and expensive or potentially toxic. The organocatalysts introduced by List and MacMillan are particularly suitable for asymmetric synthesis. By this method, chemical substances of a certain handedness (chirality) can selectively be produced. Since a large variety of drugs are chiral molecules, asymmetric organocatalysis is a very helpful tool in pharmacy: it accelerates drug production. List hopes to develop highly efficient organocatalysts that are far superior to the metallic and enzyme versions.

UniSysCat warmly congratulates Benjamin List and David MacMillan on winning the Nobel Prize. We are excited that once again developments in catalysis are rewarded! It is great to see the importance of catalysis honored by this most prestigious award in science.