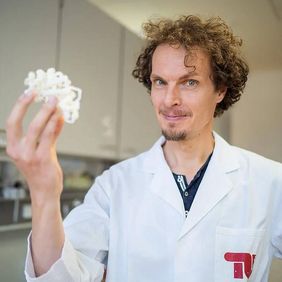 TU Berlin regularly portrays the work of selected research groups. This time, they introduce the reseach of the group of UniSysCat member Prof. Juri Rappsilber. Find the full portrait with lots of amazing photos of the Rappsilber Lab on the website of the TU Berlin as part of the series "A closer look at TU Berlin's labs". Here, we present you a stimulating excerpt of the portrait:

The word “protein” derives from the Ancient Greek word “protos” and essentially means “the most important” or “first”. And these building materials of life are exactly that, particularly so for Professor Juri Rappsilber, head of the Chair of Bioanalytics at TU Berlin. “They are the most diverse and variable building blocks of life. Nothing happens without proteins – they are key molecules in all living cells and are responsible for tissue and organ structure, function, and regulation in the human body,” he says. The Rappsilber Lab’s primary aim is to understand how proteins fold in their natural environment, what they interact with, and how they arrange themselves into larger structures.

To achieve this, the researchers analyze the proteins in two main different processes that were further developed in the academic chair. Both processes are based on the creative computational inquiry of mass spectrometric data. The researchers acquire this data using one of the most advanced and modern spectrometers available on the market.

This liquid chromatography mass spectrometer (LC-MS) is the heart of the analysis conducted in Rappsilber’s labs. The 1.5 million-euro device, well-protected in its own temperature-controlled and shaded room, does not look like anything special. From the outside, you only see a smooth metal shell with an injection device on one side and a large screen on the other. The advanced technology remains hidden behind the metal facade.

“We are not only interested in the pure protein sequence but also the dynamic 3D structure of a protein and its interactions within its natural environment, the cell,” explains Rappsilber. “We use a wide range of interdisciplinary techniques in our investigation.” His laboratory developed special expertise in the so-called crosslinking procedure as well as in data merging and visualization, the latter developed by a team from the Rappsilber group at the University of Edinburgh.

Crosslinking is a process in which functional groups of amino acids within a protein or between two proteins within a protein complex are joined together using a special “glue”. Afterwards, these proteins are analyzed in the mass spectrometer as described above. “Knowing which building blocks of a protein were close enough to be joined together by the crosslinking substances allows us to glean valuable information about the 3D structure of the proteins or protein complexes,” says Rappsilber. The Rappsilber group makes all of its published results and data freely accessible online. “My vision is to eventually be able to visualize the 3D structure of every single protein in every cell together with its interactions in a time-resolved manner,” says Rappsilber.