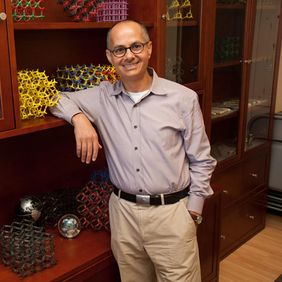 The 14th Gerhard Ertl Lecture Award will be granted to Omar M. Yaghi, who is the James and Neeltje Tretter Chair Professor of Chemistry at the University of California, Berkeley, and an elected member of the US National Academy of Sciences. Yaghi pioneered reticular chemistry, a new field of chemistry concerned with "stitching molecular building blocks together by strong bonds", as he describes it. For his outstanding scientific achievements in the field, he was chosen to be honored by the Award Committee, comprised of jurors Prof. Dr. Joachim Sauer (HU Berlin), Prof. Dr. Matthias Drieß (TU Berlin), Prof. Dr. Eckart Rühl (FU Berlin), as well as the Fritz Haber Institute’s Board of Directors and Gerhard Ertl himself.

“I am delighted and honored to receive the Ertl Prize. Gerhard Ertl's work unveiled how passion, discovery, and beauty are intermingled in science and how it is realized through the rigor of observation and study. I want to thank those who nominated and selected me for this honor,” says Prof. Yaghi.

The research of Omar M. Yaghi encompasses the synthesis, structure and properties of inorganic and organic compounds and the design and construction of new crystalline materials. He invented reticular chemistry: a building block approach which has led to new materials having a diversity and multiplicity previously unknown in chemistry. Yaghi is among the top five most highly cited chemists worldwide.

“I am very much looking forward to an exciting lecture by a leading chemist on a fascinating class of materials”, as Nobel Laureate Gerhard Ertl comments. The award ceremony will be held on Friday, 10 December 2021, the anniversary of the Nobel Prize award to Gerhard Ertl. Prof. Yaghi will give a lecture with the title “Reticular Chemistry and Precision Reactions in Infinite 2D and 3D".

The Ertl Lecture Award was established in 2008 by the three universities of Berlin (Humboldt University, Technical University and Free University) and the Fritz Haber Institute of the Max Planck Society to commemorate the awarding of the Nobel Prize to Gerhard Ertl in 2007. The prize, which is sponsored by BASF, includes a one-week research stay at the participating Berlin institutions and a festive evening lecture.