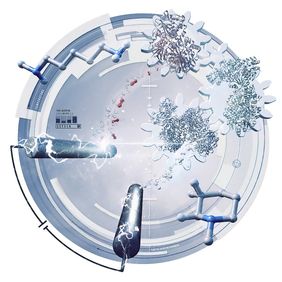 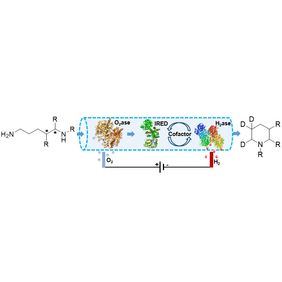 The use of electrical energy to perform chemical synthesis is considered to be clean, easy-to-tune, and sustainable when combined with renewable energy sources. The UniSysCat team of Lars Lauterbach in cooperation with Bettina M. Nestl from the Universitaet Stuttgart and Ulf-Peter Apfel from the Ruhr-Universität Bochum coupled chemical and enzyme catalysts for synthesis of fine chemicals, which is a core objective of UniSysCat.

Here, the authors developed a scalable platform that employs electrolysis for an in vitro synthetic enzymatic cascade in a continuous flow reactor. Electrolysis was performed using a pentlandite/Ni catalyst for the hydrogen-evolving reaction (HER) and the oxygen-evolving reaction (OER), respectively. Both H2 and O2 were transferred via a gas permeable membrane into the flow system. The membrane enabled the separation of the electrolyte from the biocatalysts in the flow system, where H2 and O2 served as electron mediators for the biocatalysts.The system was validated with an enzymatic cascade consisting of an oxidase, imine reductase and hydrogenase for the synthesis of N-heterocycles, which are important building blocks of agrochemicals or pharmaceutics.  The O2-dependent putrescine oxidase converted diamines to the corresponding amino aldehydes. Subsequently a spontaneous cyclisation formed the cyclic imines, which were reduced by the NADH-dependent imine reductase to obtain the saturated N-heterocycles. The consumed NADH cofactor was regenerated by a O2 tolerant hydrogenase via H2-oxidation without by-product formation.  Production of methylated N‑heterocycles from diamines with up to 99% conversion yield as well as excellent regio-selective labelling with stable isotopes was possible using this approach.This platform can be applied for a broad panel of oxidoreductases to exploit electrical energy for the synthesis of fine chemicals.