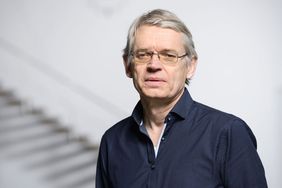 The Rumford Prize is one of the oldest scientific prizes in the United States founded in 1796 by the American Academy of Arts and Sciences. Awarded to Thomas Edison in 1895 for his work in electric lighting; Edwin Land in 1945 for his applications in polarized light and photography or Enrico Fermi in 1953 for his studies of radiation theory and nuclear energy the prize recognizes contributions by scientists to the fields of heat and light.

We are honored to congratulate Peter Hegemann for this year’s recognition of extraordinary contributions related to the invention and refinement of optogenetics. He is 2018 Awardee together with Ernst Bamberg, Ed Boyden, Karl Deisseroth, Gero Miesenböck, and Georg Nagel. The Rumford Prize will next be presented during the Academy’s Annual Awards Ceremony on April 11, 2019, at the Academy’s headquarters in Cambridge, Massachusetts.

Optogenetics has paved the road for a deeper understanding how specific cell types contribute to the function of biological tissues and was named “Breakthrough of the Decade” in 2010 by the journal Science. Optogenetics-driven research has led to insights into Parkinson’s disease and other neurological and psychiatric disorders, as well as autism, schizophrenia, drug abuse, anxiety, and depression.

“Optogenetics has revolutionized the field of neuroscience, the work undertaken by these scientists has had a profound impact on cell biology and, most recently, microbiology in ways that advance our understanding of science and of health.”, so Lucia Rothman-Denes, a member of the Academy’s Prize Committee.

“On behalf of the American Academy, I am pleased to present the Rumford Prize to Professors Bamberg, Boyden, Deisseroth, Hegemann, Miesenböck, and Nagel for their achievements,” said David W. Oxtoby, President of the American Academy of Arts and Sciences. “Along with, Alexander Graham Bell, Albert Einstein, Niels Bohr, and others, they are part of a distinguished lineage of scientists who have been honored by the Academy.”

The American Academy of Arts and Sciences, founded in 1780, honors excellence and brings together members and other leaders across disciplines, fields, and professions to pursue nonpartisan research and provide critical insight on issues of profound importance to the nation and the world. Areas of focus include the arts and humanities, democracy, education, global affairs, and science policy.

Peter Hegemann is Professor and Head of the Department for Biophysics at the Humboldt University of Berlin, Germany. He is credited with the discovery and characterization of channelrhodopsins, a family of directly light-gated ion channels. Hegemann’s research focused almost entirely on the characterization of natural sensory photoreceptors, mainly from microalgae. Hegemann has characterized behavioral and photoelectric responses of the unicellular alga Chlamydomonas, a work that cumulated in the claim that the photoreceptors for these responses a rhodopsins that unify the sensor and ion channel in one protein. He has finally proven this concept with Georg Nagel by identifying the light gated channel channelrhodopsin, and its functionality in animal cells. His group characterized this proteins in molecular detail by a wide range of biophysical techniques, and the many mutants he generated in close collaboration with Karl Deisseroth lead to the deciphering of the ion channel mechanism, including gating and ion selection. This work was the basis for the discovery of Optogenetics, a technology where light activated proteins – first of all channelrhodopsin - allow to control selected cells of large networks as the animal brain with unprecedented precision in space and time just by application of light. Currently the Hegemann group also works on light-activated enzymes as the light-activated nucleotide-cyclases which further expand the optogenetic applications to important biochemical pathways. Dr. Hegemann is the recipient of the Wiley Prize in Biomedical Sciences (2010), the Karl Heinz Beckurts Prize (2010), the Zülch Prize (2012), the Gottfried Wilhelm Leibniz Prize, awarded by the German Research Foundation (2013), the Grete Lundbeck Brain Prize (2013), the Harvey Prize (2016), the Massry Prize (2016), and the Gairdner Foundation International Award (2018). He is a member of the German Academy of Sciences Leopoldina.