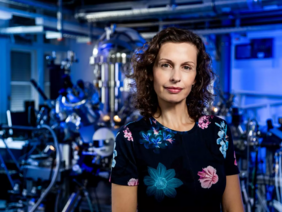 UniSysCat member Prof. Dr. Beatriz Roldán Cuenya, Director of the Department of Interfacial Sciences at the Fritz Haber Institute of the Max Planck Society, is awarded the Röntgen Medal 2022. She receives the Röntgen Medal in recognition of her pioneering work in understanding catalysis, especially electrocatalysis, and the associated possibilities for the use of new sustainable energy sources of the future.

The award ceremony for the Röntgen Medal will take place on Saturday, 10 September 2022 in the Minoritensaal of the Klosterkirche in Remscheid-Lennep. All interested parties are cordially invited to attend the event and the subsequent reception.

The Röntgen Medal is a German science prize that has been awarded by the city of Remscheid since 1951 in commemoration of the 50th anniversary of the awarding of the first Nobel Prize to Wilhelm Conrad Röntgen. Each year, the city of Remscheid, in which Nobel Prize laureate Wilhelm Conrad Röntgen was born in 1845, honors a person that has made a significant contribution to developing and spreading Röntgen’s scientific legacy. The Society of Friends and Benefactors of the German Röntgen Museum in Remscheid-Lennep e.V. selects an appropriate scientist from across the world and proposes her or his name to the Lady Mayoress or Lord Mayor, who awards the prize.