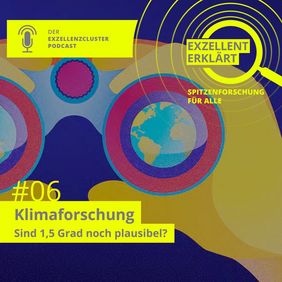 The sixth episode of the science podcast "exzellent erklärt" is now online.

In the sixth episode of the science podcast "exzellent erklärt", climate change is examined from a very special perspective: sociologists and natural scientists are jointly investigating pressing issues relating to the climate crisis within the CLICCS Cluster of Excellence. CLICCS stands for Climate, Climate Change and Society. The special combination of expertise within CLICCS provides a new approach to the topic. The current question: is the 1.5 degrees limit still plausible? Listen in, you'll get an answer - not just hot words.

Prof. Anita Engels and Dr. Christopher Heidemann conduct research at the CLICCS Cluster of Excellence in Hamburg. In the podcast, they talk about the Hamburg Climate Futures Outlook, a report in which ten key factors are named that are significantly involved in climate change from a sociological point of view. These include, for example, people's consumer behavior, but also the so-called divestment movement on the financial market. Are these factors pointing in the right direction? Is it plausible, then, that we are meeting our climate targets? The Outlook comes to a sobering result.

Anita Engels is professor of sociology, in particular globalization, environment and society, and co-spokesperson of the CLICCS Cluster of Excellence at the University of Hamburg. She is currently analyzing the different strategies of decarbonization and climate protection in companies worldwide.

Christopher Hedemann is a climate scientist and part of the synthesis team at the CLICCS Cluster of Excellence. He previously did his doctorate at the Max Planck Institute for Meteorology. At the end of 2021, he moved to the scientific staff of the Council of Experts on Climate Issues in Berlin.

When it comes to climate, a lot is possible in the future. But which climate future scenarios are plausible? Can the 1.5 degree limit of global warming be maintained at all? That depends crucially on society. For the first time, researchers from the CLICCS Cluster of Excellence are systematically assessing which social factors must point in the “right direction”. To this end, disciplines as diverse as sociology, economics and earth system research work closely together. In this way, CLICCS helps to narrow down the multitude of theoretically possible future scenarios.

The German science podcast on current science topics reflects the research diversity of Germany’s leading research institutions and Clusters of Excellence: from Africa Studies to Quantum Physics. In each episode, listeners can expect insights into the interdisciplinary work of one research network. The researchers of the clusters of excellence, funded by DFG talk to podcaster Larissa Vassilian about how they want to find scientifically based answers to relevant topics of our time – for the society of tomorrow. Listen in and follow us: https://exzellent-erklaert.podigee.io/