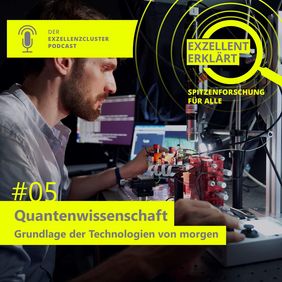 Fifth episode of the science podcast "exzellent erklärt" now online! How fair is our education system? Listen to researchers of the Munich Center for Quantum Science and Technology.

Quantum physics pushes the limits of our imagination, and provides the foundation for revolutionary new technologies. Two principal investigators of the cluster of excellence MCQST - the "Munich Center for Quantum Science and Technology", Prof. Harald Weinfurther and Prof. Kai Müller, discuss the potential of quantum technology in the latest episode of the new science podcast "exzellent erklärt – Spitzenforschung für alle".

Quantum science is the basis for the technologies of the future, including extremely powerful quantum computers and intrinsically tap-proof communication. Quantum science spans a variety of disciplines including physics, math, computer science, chemistry and engineering. MCQST - the "Munich Center for Quantum Science and Technology" brings scientists from these different disciplines together to work jointly on central research questions. Researchers from the Ludwig Maximilians University of Munich and the Technical University of Munich, as well as from the Max Planck Institute for Quantum Optics, the Walther Meißner Institute and the Deutsches Museum are represented in MCQST.

The Viennese experimental physicist Prof. Dr. Harald Weinfurter deals with the fundamentals of quantum physics and quantum optics. He is a professor at the Ludwig Maximilians University in Munich and heads the Experimental Quantum Physics group at the LMU and the Max Planck Institute for Quantum Optics. Weinfurter has received numerous awards for his work, including the Philip Morris Research Prize in 2003, the Descartes Prize of the European Union in 2004 and the Copernicus Prize in 2014.

Prof. Dr. Kai Müller is a professor at the Technical University of Munich and heads the Photonic Quantum Engineering group. His group focuses on the development of building blocks that are important for all areas of photonic quantum technologies. He is one of the designated professors for the new Center for Quantum Engineering: a new interdisciplinary institute in Garching that brings together basic research and engineering.

The German science podcast on current science topics reflects the research diversity of Germany’s leading research institutions and Clusters of Excellence: from Africa Studies to Quantum Physics. In each episode, listeners can expect insights into the interdisciplinary work of one research network. The researchers of the clusters of excellence, funded by DFG talk to podcaster Larissa Vassilian about how they want to find scientifically based answers to relevant topics of our time – for the society of tomorrow. Listen in and follow us: https://exzellent-erklaert.podigee.io/