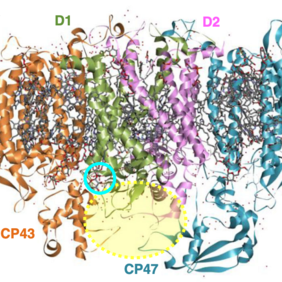 The photosynthetic process used by algae, plants and cyanobacteria is a highly complex system. Its current from evolved about 3 billion years ago and caused a major turn in the history of Earth: oxygenic photosynthesis, the conversion of light energy into chemical energy produces oxygen as a waste product. This led to the accumulation of oxygen in Earth’s previously anoxic atmosphere to about 21%. Thus, the development of oxygenic photosynthesis enabled the development of life on Earth as we know it.

Water oxidation is a crucial step in the process and is conducted in a protein complex called photosystem II (PSII) that also contains the inorganic oxygen-evolving center Mn4CaO5. This manganese (Mn) based center splits water into electrons, protons, and O2. Mn also readily forms oxides, mainly different types of manganese oxide, a mineral that occurs naturally on Earth and has a distinct rusty brown color. However, the natural formation on manganese oxide requires the presence of O2 in the atmosphere which in turn means that the formation of the rusty brown mineral should have been nearly impossible in an anoxic atmosphere – unless produced in a previous version of our photosynthetic system (Johnson et al., Proc. Nat. Acad. Sci. USA 110, 11238-11234). This is exactly what Prof. Dr. Holger Dau and Prof. Dr. Robert Burnap demonstrated in their study using spinach: their research showed, how a modified, Mn-free PSII of spinach can produce nanoparticulate manganese oxide from manganese ions in the immediate environment.

The idea to demonstrate the ability of the modified PSII to form manganese oxide stems from the early studies of scientists at UniSysCat and SFB 1078. Their idea has grown into an independent research project carried out at SFB 1078 and supported by the Einstein Foundation.

Prof. Dr. Robert Burnap is an internationally acclaimed microbiologist and molecular geneticist at Oklahoma State University and, since 2018, Einstein Visiting Fellow at the Freie Universität Berlin where he works with the Collaborative Research Center “Protonation Dynamics in Protein Function”. His studies focus on the release of oxygen in oxygenic photosynthesis by plants, algae, and cyanobacteria.