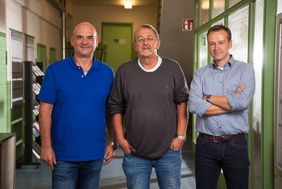 More than 85 percent of all products come into contact with a catalyst during production. Catalysis research is therefore not only regarded as one of the most important research areas in chemistry, it is also the main driver of “green chemistry,” which focuses on sustainability and resource conservation. The UniSysCat Cluster of Excellence, proposed by Technische Universität Berlin, will play a key role in Germany and can build on ten years of outstanding work by UniCat, the previous cluster of the Excellence Initiative. Individual catalytic reactions are already well understood in many cases. The challenge now is to decipher reaction networks in chemical and biological catalysis in space and time so that they can then be controlled, predicted and modified. Which key parameters enable and control chemocatalytic and biocatalytic networks? How can chemical and/or biological processes be coupled to create catalytic systems with new functions? These are the central research questions of UniSysCat.

“We are delighted about the cluster´s approval and the possibility to conduct innovative research,” says Matthias Driess, Professor of Chemistry at Technische Universität Berlin and one of UniSysCat’s three spokespersons. “We will work in five interdisciplinary research areas on the elucidation and evolution of catalytic networks. The aim is to fundamentally understand how reactants, intermediates, and reaction products come into customized contact with the various catalysts involved,” explains Arne Thomas, also cluster spokesperson and Professor of Chemistry at Technische Universität Berlin.

UniSysCat has set itself three essential structural goals: first, to sustainably support early-career researchers. Within UniSysCat, the young PhD students have an opportunity to work in an outstanding research environment, such as in the further developed Berlin International Graduate School of Natural Sciences and Engineering (BIG-NSE 2.0) within the framework of the Einstein Centre for Catalysis (EC2). Targeted recruitment strategies, including internationally competitive tenure options, as well as the Chemical Invention Factory (CIF), the first incubation center for start-ups in Green chemistry in Germany, help open up various career paths for young talents. “We want to optimally prepare young scholars for their professional careers, both inside and outside of university,” emphasizes Peter Hildebrandt, Professor of Physical Chemistry at Technische Universität Berlin and the cluster’s third spokesperson.

The second strategic goal is to achieve gender equality for women in science and to increase the proportion of women in professorships and the postdoctoral qualification phase.

The third focus is to expand national and international cooperation. Matthias Driess explains, “as a large network, we are aiming to cooperate with other large networks, such as other Clusters of Excellence in catalysis around the globe, and to jointly develop projects with them.”

UniSysCat acknowledges all involved research groups and partner institutions for their great engagement and the excellent research contributions enabling the proposal to fund UniSysCat. Furthermore we are grateful for the work of all referees and the German Research Foundation (DFG) for the review and funding of UniSysCat.